It's raining hard, i need to wear sunscreen!

I'm uberly BUSY...aint got time to think right because my
mind is drowned with overwhelming qualms and human's frigging mushy emotions. So
instead of making a sensible post, i just had a quickie blog hopping. And wtf, i
got more _blank_blank_blank with my
thoughts and more ellipses, the pausing dot-dot-dot with my life. Jeez, im a total
jinx, urghs!

Alright, i am not feeling well. I'm again caught with the
usual confusions of the 20something insecure man. Oh, yeah! life sucks and i
feel so empty again! Success is a mirage so i'd love to be difficult with myself!
Oh crap, hahaha! it's breezing out time,
pathetic! I'm mad!


p.s. i missed you blogger friends, hehehehe!
thanks for this vid OR!

Wanna take the ride of your life? The ride that’d make you feel invincible, indestructible, indispensable, unbreakable…If you’re one of the hot daredevils and risk takers, the ones the opposes the laws of motion and speed, outdoor activity is the best deal for you. And when it comes to outdoor activity, all-terrain ride would be the most exhilarating because of the bumps and loop rides that would make your gut outta your body. But this thrilling adventure was replaced by an outrageous fiasco about the Yamaha Rhino ATV. There were number of cases that were documented about the accidents and the unsafe ride to this monster vehicle, and above all deaths.

In 2006 alone, an estimated 555 people – including 100 children – were killed in accidents involving ATVs. Another 146,600 people – more than one quarter of them children -- were treated in United States emergency rooms for ATV-related injuries in 2006, according to the Consumer Product Safety Commission.

The blame was put unto the faulty design of the vehicle. There were substantiating proofs that the vehicle is dangerous even when it’s being driven at slow speeds.
Here are some of the identified faulty designs of the Yamaha Rhino ATVs:

But with these pieces of evidence, Yamaha blames the drivers for its unsafe ATV. Ironically, Yamaha offers free doors and handholds to their customers. This simply means that the Yamaha Rhino lacks some safety measures that the company’s now currently patching up with their so-called special offers, not a declaration of Rhino’s defective design.

It was a big pressure on my part, especially on the early scene wherein I was very conscious about the world around me. Every step was a challenge along with my itchiness to get into my destination. It felt like the sci-fi movie in which I was on a slow motion showground while the world’s revolving so fast around me. It was pretty hard, indeed a struggle. People were gazing as if they were seeing a crank or a person who have gone psycho. That was the picture and the feeling of walking at the speed of five seconds per step as a minimum benchmark in a rush hour streets of the metro.
While everyone’s walking so fast, it seemed that I was walking in a park, slowly and calmly. And there’s no demand of time, no pressure of getting late, no looking at my wrist watch, just a bare relaxation under my own steam. 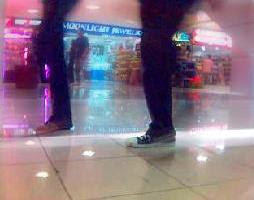 Yes folks, you’ve read it right. It’s one of my crankiness trips last week. I actually got the idea of this modus operandi in one of my books, hahaha. But there’s a rationale behind this trip up, it’s breaking up the monotony. Yep, we usually have the routine that sometimes made us clouded about the real journey in life. In other aspects, we were so engaged with the details that we usually overlooked the broad path ahead of us. So this simple exercise will at least break up your routine and let you try something new. This activity depends on your flavor; If you’re used to the fast-phase life, wherein I presumed most us all fall unto this, then you betta try this one on the other hand, If you’re laidback then try the opposite. It’s simple as the nursery game of playing the opposite. And by doing that, you’d realize something new, something out of your ordinary schedule but in the end the decision is still yours. Just try something new, something that you’re not used to…