"Hi my name is Sunny and I’m a Shopaholic."

What the…no way! Shopping is for girls only – the stereotype that I used to believe on living with my three Shopaholic sissies. When I was still a kiddo, I just couldn’t understand why my sissies were having catfights for Dior or Victoria Secret’s heady scent and on why they kept on bugging my parents just to buy them lip gloss, shoes, clothes, bags, and of course sets of make ups and then after a while I could see all those craps in clutter at their rooms. Oh girls, they’re just horrible. Then when I reached high school I formulated the thought that girls love to shop just to stumble on the right prettification for guys to notice them, just to enhance their attractiveness - in short. And then my sanity had a break off when I always heard them talking about their fantasies in shopping; the Gucci, Prada, and other designer’s products as their bliss in life. OHMIGUSH! What the hell is with them! Those things won’t transform them into Goddess! But then a twist of fate had happened, a major makeover scene of my life. It was the time when I passed the nursing board- of course I was on a cloud nine, heh heh heh. I felt that the doors of heaven had opened for me, “gimme a break from a frenzied world of studying, time for a big treat, yadahhhh!” I didn’t notice that I was already splurging for crappy craze - unconsciously. Until one day, after an exhausting “shopping” adventure I sat on my bed and I saw all the clutter (main reason why I named this site as filthyroom) in my room and all I could say was OHMIGOD! Sheesh, the scene at my sissies’ room came before my eyes –in a flash, the crap and more crap…crap everywhere. My sets of body bags, from the tiniest that looks like a momma pouch up to my luggage-sized sack, that’s one, two, three, four, five…but then I was just only using one. My caps and beanies, in red, blue, orange, black –oh no, in ROYGBIV as a disguise for my high hair lines but I guess the quantity is too much for a unique every day style in two weeks time (so they’re more than 14). I also got bunch of scarves in wide-ranging options; from Robin Hood’s fad up to the cow boy’s craggy style, and from plain shades up to the checked and stripes. And then my bracelets (and anklets too); the Nike baller Id bands in different colors – hands on the air “woot woot” cool stuff, the USB bracelets too, and the bracelets as trinkets – the shimmering item on your wrist (lol), and of course the bracelets made from thread and twines – the souvenir stuffs and keepsakes from Baguio and fabu Beaches. And of course, the big things – the techy things, though I wasn’t really into tech bites I also got hooked with them. The mobile phones with “the newer - the hotter” outlook and the photography mania (so addicted to it and been dying to buy the best DSLR in town, “drools, drools”) that in bad chance, I just settled to lomos. Now with these filthy stuffs, is

get it? (lol). But the problem was I was a certified bum then and the only way for me to survive the splurging obsession was through the alms from my sissies and parents (merci!). And I even tried to sneak my sissies’ bags (am not a klepto, bwahahaha) just to survive, lol. That was the hard part, living broke (pity me, pity me). But “tadah” I learned a lesson from my compulsive shopping experience…And now my parents and sissies are out of danger for the silent Sunny gamin, hehehe.

Catch "Confessions of a Shopaholic" in Cinemas on February 18, 2009!

We are all responsible for adding Carbon Dioxide into the atmosphere, just by doing everyday things such as driving our cars, heating our homes and flying to a holiday destination. Use Carbon Calculators (over on the right hand side) to find out how much Carbon Dioxide you or your business generates each year, how to reduce these emissions and offset what's left.

Once you have Offset your Carbon Footprint, Carbon Advice Group will send you a certificate, car windscreen permit-style sticker, Green luggage labels and window displays so you can demonstrate your Green Credentials to your friends, family, colleagues, customers and suppliers.

so what ya waitin for???SIGN UP HERE!

It’s six o’clock in the morning and the city’s starting to get busy but at my pad I could still feel the serene chilly breeze of the granite floor. I used to drink coffee to get on my way and to set my nerves for the demanding sunlight hours but then I just had a change of heart, just lately when I discovered the calming effect and the tannic waking up sensation of tea at one fell swoop. I already made a post about tea and I talked about my first palate tea experience and how I became so into it. The effect is really systemic, catching, and intense craving. From a frappacapadoodah obsession to a “cup-of-tea” habit, a beautiful twist of darling. So I may say that tea has been a part of my life. My friend from UK firstly thought that I came from England because of my “cup-of-tea” habit – lmao, just hope so. My pal from Dubai made the same mistake of “I thought you were from place” on our fist time encounter because even the Middle East local tea brand is well-known to me. Well, I guess I just love nipping the variety of teas. My palate and other senses have evolved from a plain tea drinker to a more sensitive and positive reception in tea drinking. Though I know that the flavors that came in contact with my sensation were just a fractional unit of the diverse tea flavor infusions, I still feel lucky for taking part in the bliss of tea life. The wide-ranging tea relish; from the products of Chinese with their historical oolong up to the healthful infusion of Korean ginseng, from the golden tea of Ceylon up to the radea of Arabia, from the brands of Lipton, Twinings up to East Indian and Steep, from flower to fruits infusions, and from tannic to serene aromatic tea upshot. Every sip is a unique experience because tea has a lot of surprises and distinctive types of satisfaction to offer. And here are my three newest tea brands: Steuarts, Golden Leaf, and Lyons. Steuarts Ceylon tea will never fail you to witness the original “golden tea”; it’s really heaven to look at and of course to go through with your senses. The Golden Leaf Mint Tea is without equal to other mint and peppermint infusions, it lingers all the way through your throat and appetite. And the Lyons English Breakfast tea has the unique simplicity that in certainly you’ll ask for more. 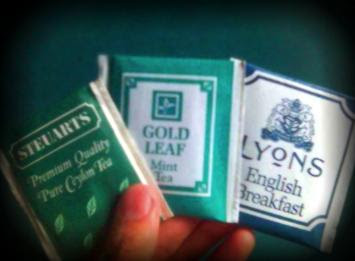