It starts with voys do fall in love
progresses to realize
then "i could fall in love" "tonight"
plus the games
and the consequences of losing a game
the interrogation
the comfort of silence
the chat til' dawn
everything's enchanting...
but now...
it's droplets...
im not sure...
but i guess this is the right thing to do...
droplets...
Posted by sunny at 11:08 PM 2 comments: 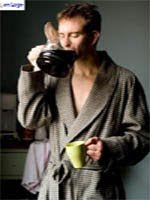 ScienceDaily (June 17, 2008) — A new study has good news for coffee drinkers: Regular coffee drinking (up to 6 cups per day) is not associated with increased deaths in either men or women. In fact, both caffeinated and decaffeinated coffee consumption is associated with a somewhat smaller rate of death from heart disease.
"Coffee consumption has been linked to various beneficial and detrimental health effects, but data on its relation with death were lacking," says Esther Lopez-Garcia, PhD, the study's lead author. "Coffee consumption was not associated with a higher risk of mortality in middle-aged men and women. The possibility of a modest benefit of coffee consumption on heart disease, cancer, and other causes of death needs to be further investigated."
Women consuming two to three cups of caffeinated coffee per day had a 25 percent lower risk of death from heart disease during the follow-up period (which lasted from 1980 to 2004 and involved 84,214 women) as compared with non-consumers, and an 18 percent lower risk of death caused by something other than cancer or heart disease as compared with non-consumers during follow-up. For men, this level of consumption was associated with neither a higher nor a lower risk of death during the follow-up period (which lasted from 1986 to 2004 and involved 41,736 men).
The researchers analyzed data of 84,214 women who had participated in the Nurses' Health Study and 41,736 men who had participated in the Health Professionals Follow-up Study. To be in the current study, participants had to have been free of cancer and heart disease at the start of those larger studies.
The study participants completed questionnaires every two to four years that included questions about how frequently they drank coffee, other diet habits, smoking, and health conditions. The researchers then compared the frequency of death from any cause, death due to heart disease, and death due to cancer among people with different coffee-drinking habits.
Among women, 2,368 deaths were due to heart disease, 5,011 were due to cancer, and 3,716 were due to another cause. Among men, 2,049 deaths were due to heart disease, 2,491 were due to cancer, and 2,348 were due to another cause.
While accounting for other risk factors, such as body size, smoking, diet, and specific diseases, the researchers found that people who drank more coffee were less likely to die during the follow-up period. This was mainly because of lower risk for heart disease deaths among coffee drinkers.
The researchers found no association between coffee drinking and cancer deaths. These relationships did not seem to be related to caffeine because people who drank decaffeinated coffee also had lower death rates than people who did not drink coffee.
The editors of Annals of Internal Medicine caution that the design of the study does not make it certain that coffee decreases the chances of dying sooner than expected. Something else about coffee drinkers might be protecting them. And some measurement error in the assessment of coffee consumption is inevitable because estimated consumption came from self-reports.
This study was supported by National Institutes of Health research grants.
Posted by sunny at 5:39 PM No comments:

Labels: food and drinks, for your gray matter

"You are what you eat" the popular maxim that was running thru my mind while I was crunching up the Greenwich foods.

It's an outraged counter when I first saw the TV ad of Greenwich about their pizza overload and now I am damn raw frustrated about their madness meals. It’s annoying that their meals look so delicious on TV ad but in reality, it's bad, bad, bad, lol...and it’s nauseating (with vomitus exploding)on how the TV ad tries to deceive our palates with colorful and digitally edited products.
It was just a month ago when I dumped my 100 bucks for Greenwich pizza parlor’s food. I was on a rush along the recto avenue when my tummy called for a break, there were only 120 pesos left on my wallet and I havn't had a meal yet so I looked up for a cheappy food chain that would satisfy my scanty budget. I landed on Greenwich esetan food chain outlet and I took the back/side door of the pizza parlor. Jeez, I was staggered looking at the dumped floor with filthy black greases in between the tiles ,haiz! but okay, I just calmed down and just assumed that that's the oldest food chain of Greenwich (lame). I took my order in a queue and went to the washroom to fix myself before choosing my table. Kablam! It was a filthy washroom with no soap, no tissue, and with a broken faucet. Therefore, if you would want to clean up yourself, you ought to go to the filthy restroom. Jeez!…Never mind, too gross to describe. I just looked for a table and waited for my food. I inferred that it’s a fast food chain but it took an epoch before I received my meal. A hundred peso meal (92 to be exact,lol), well fair enough, but the hell when I came up with my meal, it grossed me out. It was entirely different from the picture shown on the counter. The sides of the 6”x3” pizza were burnt and the toppings (and the think mozzarella) bared on the picture were lacking on the real pizzerita. The spaghetti was hopeless with unsavory sauce and the 3-tablespoon macaroni salad was dull and garish. And the most stomach-turning food was the fried chicken, it’s not well done and appeared to be the chicken from China infected with flu.
Lastly, I enjoyed watching the flies dancing on the table.

N.B. This isn’t an exaggeration. See it for yourself. I’ve been to SM Sta. Mesa Greenwich outlet too and the situation was the same.
Posted by sunny at 5:17 PM No comments: