I guess everybody knows the rush hour scene of metro manila: the fast-paced life, the queue lines, the heavy traffics and of course the bumping arena at the train stations.
Here’s my very own experience about the brawling-like train trip.
I wasn’t able to sleep the whole night anticipating the scene at my new job. I just scarcely had a few nappy hours, got up in the crack of dawn and prepared my things as usual. At around 7 am, I was geared up in my mailman’s bag packed with my ultimate survival kits. At exactly 7:30am I was already in Cubao station and I was pretty amazed because the queue was not long. Whoa! Nice nice! I paid for the ticket and got up straight to the train’s platform. Jeez! I was knocked for six! The platform was jam packed. Haiz! “Its time for my slip maneuver” Because I am relatively lanky (but exhibiting middling machismo), I was able to “slip and steal” a good point on the platform, just a thin gap before the yellow line. Yes! 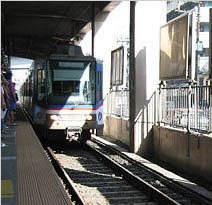 The kill time era…
Tick tack. Tick tack…
One train had passed…then…
Another train came in…and then another…total of 5 trains overtook in route to the opposite station. What the heck? There was no announcement about the delay of the trains and it’s almost 30 minutes of time wasted. One passenger (old maid-look carrying Dora's backpack) commented with extreme revulsion “they should have at least informed us about this delay and the pits they keep on letting the passengers in”. Then another passenger (pregnant hot chick) gave her angst comments “I’m just going to Ortigas, my hubby is right, I should have ride on the bus instead…” and then a chorus from the two-headed animals overshadowed the filthy scene at the platform.
Everyone was sweating! Though I down poured myself with baby cologne, my sweat glands were beginning to activate when I saw the other passengers in a perturbed feat. Haiz! It’s catching! My chemoreceptors were activated and I started to be on pins and needles.I was actually drenched with my own filthy moisture. And of course, in every crowd there’s a big shot who has the “power”, yep! There was a “man on black” shirt that really gave off the strongest aroma that screwed allour noses...jeez
Oh gosh! Gosh! At wits end! Still there was no train passing by…I couldn’t stand the heat, the aroma, the noise…the whole thing! I was already planning to take the bus and spend the dead moment on a highway traffic scene but then one train went by, finally!!!The brawling had started and the people were frenzied of getting on the train. There was a hard force from behind (not the ass) so you wouldn’t need to stride out instead you need to fight it off or else you’d fall on the train’s rail. That was physical, exhausting and it would definitely drain all your energy. I felt that that we were bunch of human-dominoes falling on the ground. After that extreme pushing and yelling too, only two or three persons could actually get on the train because it was jam packed already. Then another train came in and of course, same situation happened. It was harsh because there a woman (the one’s carrying Dora’s backpacked) who yelled “ Aray ko, maawa na kayo , naiipit na ko” (actual words she uttered) while she was pushing herself to get in to the train. It took five trains before I was able to push in to the train but I was still lucky for that because there were still a lot…lot… frenzied monkeys who were waiting to get in.
On a train….there was only an inch space between the passengers…and we were fighting off the force of inertia by just stumbling on to each other. I couldn’t breathe anymore and I felt like I was suffocated to death. That was really a brawling trip.

congrts! june08 examinees!
Posted by sunny at 10:30 PM No comments: 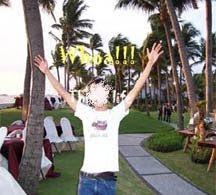 after my sister and her family left pinas for Oz, i was pretty sad because i get used to live with them especialy with my nephew bastie-kun, missed him much. Luckily my aunt had invited us (me and my other kapamilyas) to spend a day at sofitel. I was bored that day and felt just to go to sleep. But my niece insisted me to come ( i can't say No to her request) so i joined them. Room 739, nice place with a perfect view of manila bay for the enchanting sunset and the much-awaited last day prformance of pyrolympics. It was fun because i was with my kapamilya kiddos (preschool children). I enjoyed their inncocent smiles, cute giggles, and of course their impressive unstoppable questions about life and stuffs. They took a plunge in hte pool together with sun as it was sinking below the horizon and when the scene became more romantic with the ambient scattering of the sun's sinking rays, i took a plunge too. Life! I actually worked as a full-time yayo (male counterpart of yaya)for them. I attented them during the awesome fireworks display while we ate up the free buffet on the seaside up to the kidsclub play time hour. I was really fun playing with kids. It refreshed my stiff personality and made me to remember that life is simple. I aslo had my emo time on the poolside under the summer scene of the feather palms and coconut trees. It was fun-filled moment.
Posted by sunny at 1:53 PM No comments: