I am busy doing nothing. Thoughts are running through my head about a lot of things, especially the call of flesh. Right now -at this point of time, I am struggling between the cunning sexual desire and the desire to contemplate. You can’t really serve to gods. Contemplation about life and sexual appetite are totally opposite poles. You have to decide which way are you going to. Contemplation versus Sexual Desire, an ongoing struggle for each of us and lucky is the one who has found the perfect mate to enjoy the flesh without the guilt of the standards that’s has been laid upon by the culture. The standards that keep my head spinning on how I will attain exclusion or how will I twist the stated rules by inserting a sense of relativity. But RULES are absolute, universal, (and stiff ) – the books say, the wise men say, they say. Though these were intended to maintain order and equilibrium, in some points these also (somehow) create instability in someone’s world, in someone’s world created different from the scope of the cultural realms, but you’re too insignificant to be noticed (because you think you are). After a tedious and thorough contemplation about the standards – the must-do, the more I realized how hard it is to fit in yourself in the written standards if you see the world in a deliberate opposite to the rules embedded upon your soul. The rules are simply meant to give a façade of balance but obviously almost everything is on the space of instability – maybe lost in wilderness. NOW YOU DECIDE; Conformity to the world that’s running the opposite of its definition or conformity to what you think is right for you? The good way is the hard way – they say, again. But I am decided now – I conform to the things that will make me happy because at the end of the day it’s only my world, my own world.
Posted by sunny at 4:03 AM 14 comments:

I'm nobody! Who are you?
Are you nobody, too?
Then there's a pair of us — don't tell!
They'd banish us, you know.
How dreary to be somebody!
How public, like a frog
To tell your name the livelong day
To an admiring bog! 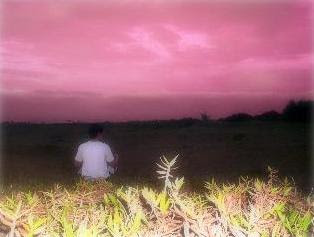 I’m no good in terms of poem interpretation, in digging out the gist beneath the lines, the words, and the tone of the speaker. However, this wonderful poem of Emily Dickenson, I’m Nobody! Who are you, had popped into my mind while I was reading the novel of Han Nolan. I first encountered this poem during my elementary grades, wherein we were given a poem recital. Our teacher explained all about the poem but I did not get any of her points, I just liked it on how I recite it; the rhyming sounds and how the poem struck me with the style that as if I was talking to myself only.


Now, at least I’ve tried to read between the lines. I’m nobody! Who are you? Contemplating about the first line caused me a long-drawn-out time. I’m nobody. It’s hard to be nobody when society has taught us to be proactive (that proactive are better) and the thought became the standard, the good, the quality. Throughout my life, I have tried to be somebody, somebody just like my dad, my cousins, my siblings’ playmates, my classmates. I've tried so hard to be somebody just to feel the sense of company and the feeling of being “likeable”. Time has transpired so fast, and I didn’t notice that I was acting somebody but in fact, I’m just nobody. I sounded like a crazy frog, blabbering just to be part of the crowd (which I didn’t recognize at first) and then I lost the sense of distinction, my own sense of distinction. I had the experience of spotlights and the cloud nine of infamy for once (at least) or twice and it made me feel like I was ten feet higher than the ground but then I fell...hard, so hard.

I remember, my high school friend had told me once that I ‘d have my failed days in due time. His words were so powerful that now I’m on my trying times, the feeling of the other extreme judging against to feeling I had on the spotlight.

Just lately, I felt “I’m Nobody”, a speck of dirt in the vast universe, floating, living, moving unknowingly, and just nothing. And for once, I felt a warmth despite of being alone, despite of my chilling hands yearning for a hand to clinch on. Somehow, it brought positive things on me - somehow. But as I looked on my cell phone, though I haven’t been “loading” for months, messages are still coming out. In that case, I’ve realized something, something very important. Yes, I’m nobody but I’m somebody for the ones who care for me, who still love( i don't know what's the right term) me despite of my blandness. They may not be a coliseum- quantity or can’t even complete a team in number but I know I could count them on my fingers. They exist not only because I think of them, it's because I’m somebody for them. I can be somebody for them or just nobody. It’s an opposing standpoint that you’d want to be nobody but you’d also want to be somebody to everyone.

Let’s talk about something new today…something delicious-oh!
Whoopsie!!! I’ve been longing to eat this yummy local delicacy for quite a long time already and the “crave” came to an end last night, after my tiring work, whoa! Right after I got off from jeepney, I saw an old lady holding a rattan basket covered with white thick cloth (Alright, if you’re a true-blooded pinoy, you might already have guessed what I trying to say here). After seeing that lady, thoughts of the past came in. The delicacy bracketed with my happy childhood experiences; after a stroll at the park, my sister would usually buy this before going home and sumptuous pigging out would over and done with at home. I also dwell upon this delicacy during the midnight summer talks at the foyer with my cousins. Whenever we hear this reverberating call of the vendor, it would only mean one thing, close to midnight and time to close up.

The ahoy – Balooooot…baloooot…balooot in a squeaky tone, falsete el voz!

Yep, buddies I am talking about BALUT, a fertilized duck (or chicken) egg with a nearly-developed embryo inside that is boiled and eaten in the shell. It was few years ago when my palate had a taste of it and it is coupled with my down memory lane of tender age. Anyhoo, here’s what happened. I walked past the balut vendor though I really had the urge to buy and it took me two blocks away to turn over and retrace steps. “Manang yun maliit lang yun sisiw ha” and then I paid 15 pesos. I was sniggering walking home with the warm balut on my hand. “Yipee, I’ll be able to taste you again”. I was really excited to wolf down the balut - to devour the sabaw (amniotic fluid) and have a taste for once again the protein-rich egg yolk. I never thought of eating the sisiw (embryo) because I always imagined the beak and claws scratching my throat and of course the queer feeling of the downy feather.
And then, when I cracked up the shell (I was in suspense to gulp up the sabaw), I saw teenie-weenie blood vessels and some sort of coagulated blood, “gulp, gulp”. But I continued (still got the nerve to open it up), and then I saw the horrible embryo inside and KABLAM, it just grossed me out. The scene on my nursing bio-lab flashed in, the horror sight of the fetuses floating inside the glass canisters. Sheesh, I had the feeling of throwing up and it made me wonder on how did I able to rejoice in with this chiller when I was as still a kid. 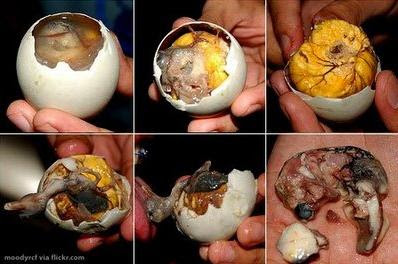 Hmmm…How about one-day old chick? I’ll give it a try next time.