schadenfreude the crispy garnish that tastes just like its name 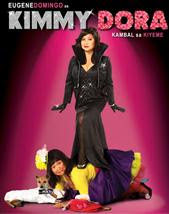 Whew! This movie just made my day.

It's easier to make people cry than to make them cry out of laughter. Dramatic movies can easily trigger the in-depth emotional burdens of a man. On the other hand, comedy movies emphasize humor, but it's pretty hard to set off mirth because of the effin' problems and yoke embedded in man's emotional state. Thereforae, it takes a lot of guts and genuine style for a comedy movie to hit a wave. But on the lighter side, Filipinos are considered as one of the happiest people on earth so despite the turmoil, we still able to laugh out loud, even just in movies.

So talking about movies, Kimmy Dora (kambal sa kiyime), just made my day. It’s been a long time that I’ve been longing to have a long laugh with giggles and Eugene Domingo made this to happen. She plays a double role of twins Kimmy and Dora, which are the extreme of each other. Kimmy as the domineering, pride-flaunting, workaholic, but loveless animal, while Dora as dumb (nah, just slow), retarded (nah, just late bloomer) loser, but has the love that Kimmy dreamed of.

Imma not tell the whole plot, just watch the movie for you to experience the laughter that I’ve been asking for. KUDOS for Eugene!

hey.. just dropping by in blogwalking :)
greetings from Jakarta Indonesia :)

ridiculous. i dunno why but people just kept on laughing like apeshit inside the theater kahit sobrang babaw lang.

is it just me or talagang mababa lang sense of humor ng mga tao lately. had to leave after 45 minutes of watching the movie, it was all too predictable.

but for people wuz fedup of being over-logical and rational,lol...this kind of movie is a smash...

and last point, i laugh out loud like a monkey's dung inside the cinema and u know what it felt so good....grins!

eek. hahaha. you dont really have to be rational. thing is, my friend payed for it so i didnt waste any money.

make it a 7-star movie. hehehe

@ xprosiac...you are a certified addict! bwahahahahaha! peace out

i love this movie,,, just in case your so down in your life and you just want to end it try watching this movie first and youll just go crazy!!!