Yesterday I was fucked-up because of the heavy rains that pelt down the earth and caused a hasty filthy flood.

I left home going to my cousin's pad with a promise to my sister that I would be back before 3pm for my niece's tutorial. But unavoidable things may happen anytime and for me it was the rain. The heavy rain caused the flood - a usual scenario here in metro manila, and made a bumper-to-bumper traffic. I sent a text message to my sister informing the grave situation but I did not receive any reply. Then I made a ring to clear out things but she did not understand me or I think she did not even make an effort to understand me. She's firm when it comes to deadlines and promises. She has this high flaunting ego and stiff personality, maybe because of her job - a manager to a dozen of subordinates that consumed her light attitude, I guess. She talked to me as if it was my entire fault. And the conversation was leading to a point that I was just exaggerating or fabricating a story. 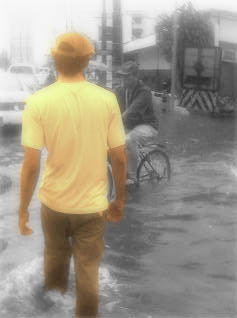 With my stupidity, I did what he she has instructed me to do so. I went against the resistance of the flood and traffic. I walked along the streets; riding on a cab or any type of conveyance is useless at times like that. My shoes, socks, pants - the whole me, were totally drenched by the filthy water. And the feeling was very odd. The time I got home, I was totally soaked, literally speaking. My sister opened up the door for me and then I saw the shock reaction in her eyes, but she hid it by saying, "Nobody has insisted you". I did not say a word.
This is my stupidity. Yes, I am stupid and I love to do stupid things. What’s the payoff of being stupid? Pain, yes, it’s the pleasure of inflicting pain: the pain that makes you more of a human as you feel how vulnerable and weak you are. Stupidity defines smartness that makes a laughing stock for the feeling-smarty people. I love this pain because I am a masochist. It delights me whenever there is pain, to receive pain with open arms. They say that it’s a human nature to shield out pain but I think I deviate to this benchmark. More over, I also love to share my bitterness; to share the pain that I have and for others to appreciate it and to learn how to love it. For being silent, I know that I had won a part of that battle. I know that I shared with her my stupidity, and my pain. And it’s the most pleasurable pain: when you didn’t do it directly but it shot the target precisely – on their hearts. I am a sadist too.
Posted by sunny at 9:40 PM

wawa ka man padi, but i admire you for keeping your cool.. Im kinda like that, when im mad i dont say a thing to the person but di ako masokista hehe..