You Don't Mess with the Zohan 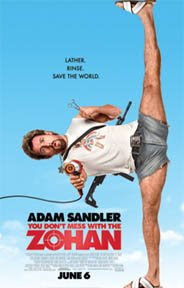 You Don’t Mess with the Zohan. The first half was okay; I chuckled and had the “lol” turn of phrase, somehow. But the next half was damn lackluster with Adam Sandler’s worn-out itch of his prick punch lines; prick for massaging, disk jockeying, and for reviving the geriatric’s “Ooooh ahhhh hmmmhmmm feels great” moments. Anyways, it is about the bionic Israeli who fakes his death and goes to New York to fulfill his dream of being a hairstylist. The movie has gags about the Israeli-Palestine conflicts, and conflicts to some delusional Yankees. It isn’t a good movie and emphatically not a thumbs up movie of Adam Sandler, but it isn’t bad at all, just to be fair.
I guess it is the changeover of comedy movie right now, losing its substance of handling a cryptic lesson to the viewers by an amusing line of attack. Just like the baloney Epic Movie, Borat and other sexual-comedy movies, the rise of new genre. But when you’re feeling so stupidly emo, this kind of movie is recommended for you, to blow out the shit out of hell. Rating: Two and a half stars, out of five.
Posted by sunny at 3:59 PM