union with the ultimate: draft. 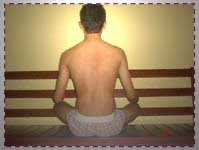 There was a time during my college days wherein i was really frantic about the school jam..My classmates had noticed me that i look filthy with my unkempt hair, puffy eye bags, and with my unorganized things. Stressed! Stressed! Stressed! Then one of my classmates pulled me back and took me to the cavern like spot on our school. "Hey, want to straighten your messy life"? She asked. I was in full amazement with her question and i took a moment to think through if my life was indeed so bad. She also paused for a moment as if she was waiting for the right timing (until my delirious face was turned back to normal) and then she started to disclose her little secrets about "happy life". I couldn't believe that someone like her was talking to me about "happiness and peace" blah blah for i had the prejudice thought about her - "weird and filthy". But she's persuasive, i was convinced to attend a yoga class with her.

It was a mid afternoon under the shady tress and grassy purview near the soccer field and the bunch freakazoids were sitting on the ground in a circular manner. There was one person playing a mini drum with goatskin cover and another person was holding a maracas-like instrument.The headmaster of the group invited me to sit beside him. He had a serene face and he talked in a calm manner. He commenced the activity by a short lectures about yoga and its principles and after that we started the sanskrit chant in air with drums and maracas for a humble entreaty.

"Yoga: union with the ultimate. The purpose of yoga is to lead to a silence of the mind. This silence is the prerequisite for the mind to be able to accurately reflect objective reality without its own subjective distortions. Yoga does not create this reality, which is above the mind, but only prepares the mind to apprehend it, by assisting in the transformation of the mind – from an ordinary mind full of noise, like a whole army of frenzied and drunken monkeys – to a still mind."

The first time gathering was followed by another and another...and I was able to recite the lengthy superfluous chant on the Buddha beads. I succeeded in absorbing all the external forces around me and in detaching myself to the world. Until one day...
Someone knocked aT my door and gave me a test about faith...

Because of the conflict in faith, i slowly withdrew myself from the group and started all over again. But Yoga has thought me a lot of lesson. It's not only about the relaxation and comfort that you can gain but the technique of having a peace of mind that really matters. So at times that i feel so bad bad bad, i take a moment and practice yoga.
Posted by sunny at 12:16 AM